It is with deep sadness that St. George’s University announces the passing of one of its founders, Louis J. Modica. Mr. Modica is the father of Chancellor Charles R. Modica, and a founding member of the University’s Board of Trustees. Mr. Modica was 92.

Mr. Modica shared his son’s vision of establishing an independent school of medicine in Grenada, and on July 23, 1976, they along with Patrick F. Adams and Edward McGowan formed the University’s first Board of Trustees. Their active involvement in the ensuing years assured its growth into an innovative and international center of higher education. 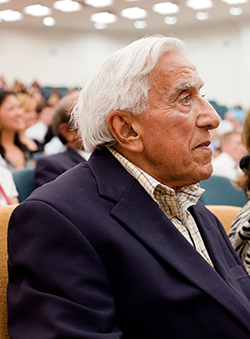 Mr. Modica’s guidance and support resulted in the principles that shape the University to this day, including its deep commitment to its host nation. For their contributions to St. George’s University, a newly constructed three-floor study hall on the True Blue campus was named Louis and Marion Modica Hall in their honor

Mr. Modica dedicated his life to developing real estate on Long Island, NY, most notably on its south shore, where he and his family lived since the 1950s. He was highly active in the Bay Shore community.

In lieu of flowers, memorial donations may be made to the Fund for the Orphans & Elderly in Grenada. Donations may be sent to University Support Services, C/O Jackie Alaimo, 3500 Sunrise Highway, Building 300, Great River, NY 11739.

Dr. G. Richard Olds Addresses America’s Imminent “Million-Doctor... Wilson joins the Great Falls Clinic Surgery Department 4/13/16
Scroll to top
Our winter term starts this January for all students!   View FAQs      |      I do not have an MCAT score. Can I still apply?   Learn More
This website uses cookies to provide necessary site functionality and improve your online experience. By continuing to use this website, you agree to our use of cookies. View Our Privacy Policy
Accept