St. George’s Commitment to Excellence in Teaching a Testament to His Legacy 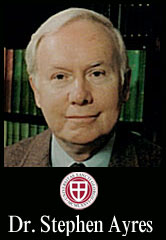 Dr. Stephen Ayres, former Vice Chancellor and Executive Dean of St. George’s University School of Medicine, and a significant force in the development of the medical school’s commitment to excellence in teaching, died in September of last year. With the new academic year upon us, the St. George’s community is reflecting upon the influence he had on the University throughout his tenure.

Dr. Ayres’ commitment to “training the trainers”, especially in clinical medicine at the bedside, had a significant influence on the culture of lifelong learning that is the foundation of medical education at St. George’s. He believed, and wrote extensively in published works, that medical schools need to spend more time teaching the clinicians who train medical students and residents at the bedside. He instituted workshops and seminars during the School of Medicine’s clinical meetings, and his passion for this subject influenced the change of mission of the Bourne Lecture Series in the School of Medicine which now also addresses the topic of clinical teaching.

As Executive Dean of the School of Medicine, Dr. Ayres worked to bridge traditional medical education methods with a hands-on approach for a global community of students. His dedication to student and faculty success fostered St. George’s commitment to academic support services and to helping teachers teach even better than they do already, utilizing the best in technology and traditional methods.

Margaret Lambert, St. George’s University Dean of Enrollment Planning and co-Director of University Communications remembers Dr. Ayres fondly. “St. George’s was lucky to have counted Dr. Ayres as a member of our community,” Dean Lambert recalled. “His leadership provided the medical school with rich educational opportunities and helped pave the way for its continued progress and growth in stature throughout the world.”

Providing St. George’s medical students with the opportunity to learn how medicine is practiced in a very real, hands-on way remains the cornerstone of his legacy. Dr. Ayres devoted his life to academic leadership and the St. George’s Community will remain forever grateful to have had the opportunity to thrive under his direction.

Dr. Stephen Ayres was preceded in death by his son, Stephen McClintock Ayres Jr. He is survived by his wife, Dolores Kobrick Ayres; two daughters, Elizabeth Ayres-Kerr of St. Louis and Margaret Frazer of Manteo, N.C.; a brother, David Ayres of Raleigh, N.C.; five grandchildren and a great-grandson.

St. George’s University Welcomes Families to True Blue Campus
Scroll to top
Our fall term starts online this August for all students!   View FAQs      |      I do not have an MCAT score. Can I still apply?   Learn More
This website uses cookies to provide necessary site functionality and improve your online experience. By continuing to use this website, you agree to our use of cookies. View Our Privacy Policy
Accept