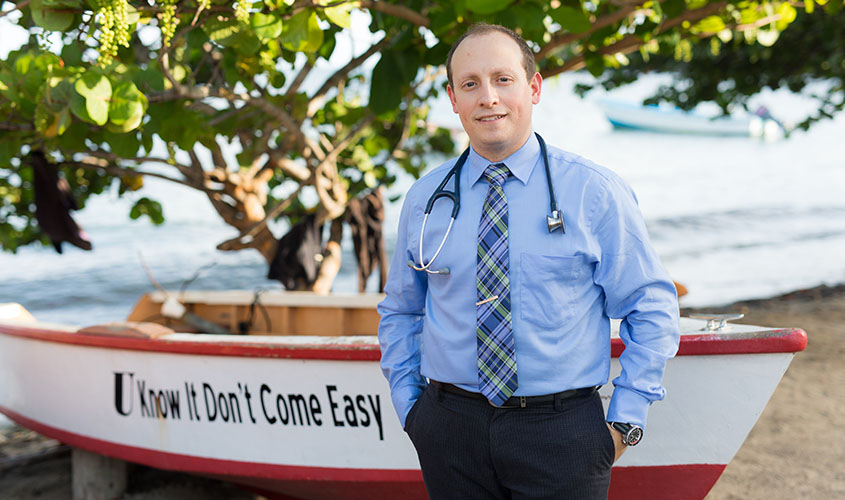 On June 22, Mr. Karp had completed his basic science studies and was headed to New York City for his clinical rotations. About an hour into the flight, he learned that a passenger had wandered into the rear of the cabin. Mr. Karp, an NYC paramedic for 11 years, found the 59-year-old male to be cool, pale, and sweating heavily, with agonal respirations and no pulse. With the assistance of another passenger, Mr. Karp immediately brought the patient to the floor and began cardiopulmonary resuscitation (CPR) and assisted ventilation.

CPR continued for approximately eight minutes, after which time the patient became “alert and oriented” and began to produce a “nice, strong pulse.” He then sat up and informed Mr. Karp that his glucometer was with his belongings. The man’s blood sugar registered at 331 milligrams per deciliter (mg/dL), or highly hyperglycemic.

“Without a pulse, he wasn’t producing enough pump to provide enough blood pressure to maintain his vital organs,” Mr. Karp said. “Good compressions assisted that, his body compensated, and he ultimately came back.”

The flight made an emergency landing in San Juan, Puerto Rico, to allow emergency responders to tend to the man’s health.

“We caught him at the right time,” Mr. Karp said. “Saving a life, even as a paramedic, doesn’t come around that often, especially when someone goes into cardiac arrest. It’s very unusual to be within the window of opportunity to bring someone back to full responsiveness. To be able to help is very rewarding.”

Before continuing on to New York, Mr. Karp learned that his patient lived two blocks from his family’s first home in Brooklyn, in a neighborhood that he later visited many times as a paramedic. In addition, the man was a native Grenadian, while Mr. Karp’s father was born and raised in Barbados.

“We talked a lot about our similarities,” Mr. Karp said. “It was a very interesting connection. There’s a good chance we had crossed paths at some point.”

That they crossed paths—perhaps again—on the flight not only saved one man’s life but it rerouted Mr. Karp’s career path. He had hesitations about emergency medicine, citing the hectic lifestyle that comes with it.

“I was uncertain until this moment, but this experience definitely solidified it for me,” he said. “I had thought about going into family medicine because you develop closer relationships with patients, but I think I thrive in emergency medicine. I do love that type of environment, and this taught me this is maybe where I’m needed most.”

University of Munich Recognizes SGU Professor for Lung Function Research
Scroll to top
Our fall term starts online this August for all students!   View FAQs      |      I do not have an MCAT score. Can I still apply?   Learn More
This website uses cookies to provide necessary site functionality and improve your online experience. By continuing to use this website, you agree to our use of cookies. View Our Privacy Policy
Accept