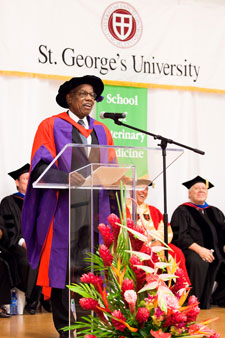 On Saturday, May 15th St. George’s University (SGU) hosted its 2010 Commencement Ceremony in Charter Hall on the True Blue campus. The commencement was a combined ceremony of over 250 undergraduate and graduate students, 139 of whom are Grenada nationals.

Students and their families were honored by guest speaker Sir George Alleyne, Chancellor of the University of the West Indies and UN Secretary General’s Special Envoy for HIV/AIDS in the Caribbean. His poignant speech, “The Price of Privilege” emphasized each student’s responsibility as a privileged graduate of higher education and subsequent vessel of information; information that is to be shared for a greater good.

Having visited the University 30 years prior, Sir George Alleyne reflected upon how much the University has changed, and how its commitment to providing a superior, service-minded education to its student body now applies across many disciplines. As he addressed the graduates he expressed, “the great majority (of you) are from families in which a university graduate represents the exception rather than the rule.” He informed the graduates that “a university education provides benefits that goes beyond the individual graduate,” and challenged them to play an active and positive role in instituting societal change; change that addresses discrimination in all its existing forms.

“The currency in which you will pay this price of privilege has compassion, engagement, and commitment among its highest denominations,” said Sir George Alleyne. With the understanding that many of the graduates will likely occupy positions of influence and power in their countries, he charged them to apply the skills they acquired and the talents they possess to “sharing information for the creation of a better society.”

Dr. Allen Pensick, Provost of St. George’s University, reminded the graduates that “the term ‘commencement’ means the beginning of a journey rather than its end. You leave us equipped with the basic knowledge and skills for you to continue learning. This continued learning is absolutely necessary for all of us to keep pace with the ever-changing world in which we live.”

Chancellor of St. George’s University, Dr. Charles Modica, joined in extending his congratulations to the graduates and expressed pride at their accomplishments. He reminded the audience of the genesis of the University, stating “ …this University has its most important purpose – to educate Grenadians. We do give educational opportunities to people in other countries, and we educate many Grenadians. We are so proud of that.”

The valedictory address was delivered by Ms. Sharmaine Shallow of St. Vincent & the Grenadines who pursued her BSc in Life Sciences with a Marine Biology specialization. In her delivery she declared that “It is our time to leave SGU, but SGU shall not leave us. SGU is not merely a learning center. It is a diverse community that has shaped us and made it easier to enter into the world, small fish in a big pond. Small, but prepared! SGU has not only given us the knowledge for our respective careers but has opened our eyes to different ways of thinking and interacting with people. It truly has allowed us to ‘Think beyond’!”

Mr. Nicholas Cheronis, the graduate class speaker, was selected by his peers from a number of students with a grade point average of 4.0 in the Graduate Studies Program (GSP) and completed a Master of Public Health (MPH) in Environmental and Occupational Health. Like the valedictorian and other speakers, he acknowledge the impact of attending St. George’s University and he too challenged his peers not to be complacent with their achievement, but rather to continue in their pursuit of higher education, achieving rewarding careers and a maintaining the desire to positively impact their immediate surroundings.

Sir George Alleyne has had a remarkable career in academic medicine, administration, and as a global leader in health policy whose vision has served this region so well for many decades. Sir George has received numerous honorary degrees and awards in recognition of his work, including prestigious decorations and national honors from many countries. Of these Sir George is most proud of being awarded in 2001 the Order of the Caribbean Community, the highest honor that can be conferred on a Caribbean national.

St. George’s University Students Develop Online Medical Application
Scroll to top
Our fall term starts online this August for all students!   View FAQs      |      I do not have an MCAT score. Can I still apply?   Learn More
This website uses cookies to provide necessary site functionality and improve your online experience. By continuing to use this website, you agree to our use of cookies. View Our Privacy Policy
Accept