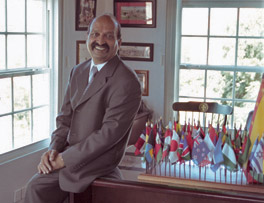 The honorees and their families and friends were welcomed to the awards ceremony by Dr. John J. Cush, an SGU graduate and a member of the SGU Board of Trustees, who helped promote SGU’s development of a local chapter of the Gold Humanism Honor Society. Dr. C.V. Rao, Dean of Students at SGU, addressed the students and congratulated them on their philanthropic achievements and desire to “go the extra mile”. The keynote speakers that evening were Sandra O. Gold, EdD, and Arnold P. Gold, MD, the founders of the Arnold P. Gold Foundation. School of Medicine Dean, Dr. Stephen Weitzman, also congratulated the honorees and encouraged them to continue their extraordinary efforts in helping others as they become doctors.

This year’s honorees are:

The Gold Humanism Honor Society (GHHS) was established in 2002 by the Arnold P. Gold Foundation to foster and acknowledge humanism among medical students. The GHHS has been established at 47 US medical schools and three international medical schools since its inception. St. George’s University became one of the three in 2005.

The award is given to medical students who demonstrate humanistic characteristics during their time in medical school, including positive mentoring skills, community service, compassion, sensitivity, collaboration, and observance of professional ethics. The students must be dependable and trustworthy, exhibit exemplary patient care, and show devotion to the community and the underprivileged.

“This award is a terrific way to reward, in a non-monetary and non-academic way, the efforts of those students who have given their personal time, money, resources and efforts to benefit others while in Grenada, St. Vincent’s, or during their clinical rotations,” said Dr. Cush. “Our 13 students found the time and the will to work to benefit others as they maintained their academic excellence. We want them to know they are appreciated and that SGU is a university that places a premium on humanism in medicine seriously and we want to foster these ideals in our students.”

Students were nominated for the award by their peers, faculty, or by themselves. The list was then presented to an awards committee made up of a diverse group of SGUSOM faculty and administrators.

St. George’s University Mourns the Loss of Dr. Paul Cutler
Scroll to top
Our winter term starts this January for all students!   View FAQs      |      I do not have an MCAT score. Can I still apply?   Learn More
This website uses cookies to provide necessary site functionality and improve your online experience. By continuing to use this website, you agree to our use of cookies. View Our Privacy Policy
Accept