One of the world’s experts on Chikungunya and Dengue, Dr. Desirée LaBeaud, Associate Professor of Pediatric Infectious Diseases at Stanford University, delivered an insightful lecture on the debilitating mosquito-borne infections that have recently affected the Caribbean as part of the St. George’s University Public Lecture Series.

Chikungunya and Dengue in Grenada and the Americas: What Are We In For? 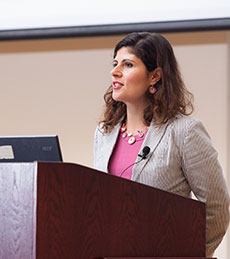 Chikungunya is a hot topic in Grenada, as well as in other parts of the world where it is beginning to be seen. Chikungunya and Dengue have affected many people in Grenada and its impact in the nation is of great interest to all concerned.

One of the world’s experts on Chikungunya and Dengue, Dr. Desirée LaBeaud, Associate Professor of Pediatric Infectious Diseases at Stanford University, delivered an insightful lecture on the debilitating mosquito-borne infections that have recently affected the Caribbean as part of the St. George’s University Public Lecture Series on November 11.

“We don’t really understand the true economic or health impact of these infections,” said Dr. LaBeaud.  “It is critical to try and prevent an outbreak rather than trying to deal with one once it occurs.  We need to optimize epidemic vector-borne disease control.”

In her presentation titled “Chikungunya and Dengue in Grenada and the Americas: What Are We In For?” Dr. LaBeaud stressed the role that increased global travel plays in the spread of these diseases to epidemic proportions. Citing recent research, she presented her audience with an overview of the chikungunya and dengue viruses, a chronological history of their spread, their symptoms, control, and prevention strategies. Their recent spread to the Caribbean has brought their treatment and preventive measures into the spotlight.

“Active, ongoing surveillance is crucial, and you need to respond within the first few weeks of an infection presenting itself in your community,” said LaBeaud. “A delay of just two weeks can result in an exponential increase in both the human cases and the costs to abort an outbreak.”

Dr. LaBeaud stressed that, on an individual level, the only way to prevent chikungunya is to prevent the bite of an infected mosquito. While mosquito nets are great for preventing malaria because its vectors feed at night, they are generally ineffective against preventing CHIKV whose vectors bite during the day. She recommends wearing repellent, and destroying potential breeding sites around households.

More intense measures are being considered by scientists for a global response to these threats in the future. These include RIDL technology, releasing insects with a Dominant Lethal gene that causes only males to be bred, and the promotion of the Wolbachia bacteria which make mosquitoes inefficient transmitters of disease. Several vaccines are also being developed to prevent both chikungunya and dengue.

St. George’s University Hosts Highly Successful Public Health For-Credit ...
Scroll to top
Our winter term starts this January for all students!   View FAQs      |      I do not have an MCAT score. Can I still apply?   Learn More
This website uses cookies to provide necessary site functionality and improve your online experience. By continuing to use this website, you agree to our use of cookies. View Our Privacy Policy
Accept