GVN, SGU and WINDREF Bridge the gap between researchers and media

The Global Virus Network (GVN) held its first Virology Workshop for Journalists in partnership with St. George’s University (SGU) and the Windward Islands Research and Education Foundation (WINDREF) in Grenada, West Indies this past month.  Nearly two dozen reporters from the U.S., Caribbean and Estonia descended on the “Isle of Spice” to minimize the glaring information gap between medical researchers and mainstream media.  The workshop addressed what can be a complex subject – the science and epidemiology of viruses – and broke the subject down to a comprehensible level that can be utilized when reporters need to communicate to the masses about important news relating to viruses.  Several key issues between reporters and scientists were addressed during the three day meeting. 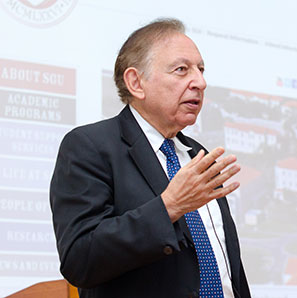 “This workshop is important in facilitating relationships among the world’s experts, media and policymakers,” said the Rt. Hon C. Modeste-Curwin, Grenada’s Minister of Health during her opening address to the participants. “Additionally, as a result of this workshop, the Government of Grenada will work closely with the GVN, SGU and WINDREF to help train our nation’s medical researchers and identify prevention and treatment measures for our new and existing viral infections.”

“In order for journalists to properly illustrate the issues faced by researchers, they must be equipped with a basic understanding of the subject matter, and we believe this workshop delivered the message effectively,” said Charles Modica, Chancellor of St. George’s University. “We look forward to continuing to work with the GVN on future endeavors, both in Grenada and around the world, to further its efforts.”

The workshop included, among other subjects, lectures on the biology of viruses, challenges related to viral therapeutics, vaccines and diagnostics, a laboratory demonstration of microbial detection and a visit to SGU’s hospital led by prominent scientists Dr. Don Junkind, chair of the Department of Microbiology at SGU and Anders Vahlne, PhD of the Karolinska Institute and center director of GVN’s Sweden-Estonian Center of Excellence.   Dr. Robert Gallo, most widely known for co-discovering HIV and developing the HIV blood test, also led a panel discussion, “Can science make the world free of HIV/AIDS?”

“There is a clear gap between what scientists know and what the public knows,” said Dr. Robert Gallo, co-founder and scientific director of the GVN and director of the Institute of Human Virology (IHV) at the University of Maryland School of Medicine.  “Journalists are the critical bridge between these groups.”

“The GVN Journalist Virology Workshop is an eye opener for those of us who are here and the people of South Sudan who are not attending this conference,” said the Hon. Tong Deng Anei, State Minister of the Ministry of Health, South Sudan.  “Journalists play a key role in the society, and having them actively participate in what we do – such as the technical aspects of the healthcare system – is very crucial indeed. We will work closely with our journalists at home to ensure that our actions are known to the wider public.”

Dr. Cal Macherson, Vice President and Director of WINDREF said “WINDREF and SGU were delighted to partner with the GVN and IHV to host the workshop at SGU’s True Blue campus in Grenada.  The roles of scientists and journalists in combating the global viral threats were keenly explored by experts from both fields.”  Dr. Joyce Fitzpatrick from Case Western Reserve University, Ms. Myrtle Bruno from Nature Isle News in Dominica, Dr. Florence Haseltine, US National Institutes of Health (NIH) Emerita Scientist and GVN’s Chief IT specialist, and Dr. James Hamblin, senior editor of The Atlantic, led panel discussions.  Journalists received a GVN Virus Resource Book for the Caribbean and were most interested in learning more about the myths led by the anti-vaccination movement versus the scientific truths about vaccinations and the millions of lives they save each year.

GVN plans to hold a second Virology Workshop for Journalists this May in Capri, Italy.

St. George’s University USMLE Step 1 First-Time Test Takers Achieve 98% Pass... St. George’s University and University of St. Thomas Join to Offer Pre-Medical...
Scroll to top
Our winter term starts this January for all students!   View FAQs      |      I do not have an MCAT score. Can I still apply?   Learn More
This website uses cookies to provide necessary site functionality and improve your online experience. By continuing to use this website, you agree to our use of cookies. View Our Privacy Policy
Accept