The fourth Windward Islands Research and Education Foundation (WINDREF) dinner, held at the House of Lords in the British parliament. Hosted by Baroness Howells of St. David’s, WINDREF President, the dinner highlighted the role of sport, diet, and exercise in preventing diabetes and obesity and raised funds for the Sport for Health campaign in Grenada. 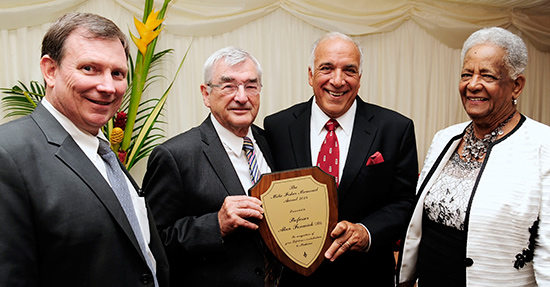 WINDREF launched its Sport for Health program at the House of Lords in 2010 as a way to address the recent and dramatic increase of obesity in Grenada. The program has partnered with St. George’s University and several organizations in Grenada, including all 22 secondary schools in Grenada, Carriacou, and Petite Martinique, to promote physical activity and a healthy diet for people of all ages, as well as teach ways to prevent and manage chronic disease such as diabetes and heart disease.

At the dinner, WINDREF awarded the annual Mike Fisher Memorial Award, its most prestigious honor, to Professor Alan Fenwick, Professor of Tropical Parasitology at Imperial College, London. Professor Fenwick was honored “for his outstanding work in the research and control of schistosomiasis, which has benefited over 100 million people in underprivileged countries – particularly children,” according to Dr. Calum Macpherson, WINDREF’s director, in announcing the award.

The award is named for Dr. Mike Fisher, who discovered the drug ivermectin – sparing 35 million people in developing countries from blindness and disfigurement and providing domestic animals and livestock with healthier lifestyles. Dr. Fisher died in Grenada in 2005, and WINDREF has acknowledged important researchers with the Mike Fisher Award every year since.

Calum Macpherson, PhD, FRSPH named to CARPHA Research Advisory Board
Scroll to top
Our winter term starts this January for all students!   View FAQs      |      I do not have an MCAT score. Can I still apply?   Learn More
This website uses cookies to provide necessary site functionality and improve your online experience. By continuing to use this website, you agree to our use of cookies. View Our Privacy Policy
Accept