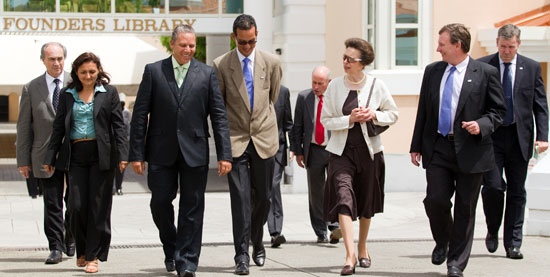 Her Royal Highness, The Princess Royal, Princess Anne with members of the CCELD

On Saturday, June 4, 2011, Grenada welcomed members of the Caribbean-Canada Emerging Leader’s Dialogue. The conference lasted four days at the Windward Islands Research & Educations Foundation (WINDREF) and was part of an intensive two-week program. The program initially began in Ottawa, Canada where 80 participants of the Caribbean, along with 40 participants from Canada, engaged in two days of presentations, discussions, and networking. They then divided into study groups of 12 participants each, travelling to different locations in Canada and the Caribbean to visit communities and workplaces from both public and private sectors and civil society.

Grenada was one of 10 Caribbean countries hosting a study tour before the full dialogue reconvenes in Barbados for the final three days. This year’s conference was held under the theme “Growth Through Connections: Enabling Sustainable Progress.” During the study tour in Grenada, the participants visited local businesses and industries as well as met with several stakeholders including government, the police, and community leaders. These visits provided an opportunity for the team to be exposed to the diverse challenges being faced by these leaders. 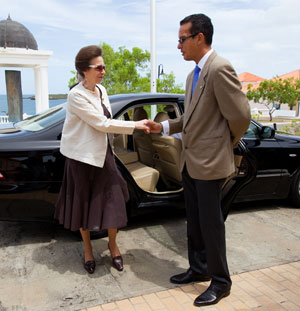 As Dialogue President, Her Royal Highness, The Princess Royal, Princess Anne attended a number of CCELD visits and events. On Tuesday, June 7, 2011 she visited the participants at WINDREF where the day’s session included a panel discussion with Deputy Commissioner of Police Franklyn Redhead, Mr. Nigel John, and Mr. Robert Frederick as well as a culture and history presentation by Mr. Richardo Keens-Douglas—renowned story teller, playwright and author. Her Royal Highness, The Princess Royal, Princess Anne and attendees were also joined by Dr. Nicole Phillip, author and Dean of the School of Arts, Sciences and Professional Studies at the T.A. Marryshow Community College.

Margaret A. Lambert, St. George’s University Dean of Enrolment Planning and WINDREF board member, stated “WINDREF through its research has been able to contribute to advances in health and environmental development through multidisciplinary research and education programs. We see hosting this conference as another opportunity to bring intellectual talent together to address challenges and issues of international importance.”

WINDREF is an independent nonprofit organization located on the True Blue campus of St. George’s University in Grenada, West Indies. WINDREF is registered in the United States with the Internal Revenue Service 501(C) (3) as an educational non-profit foundation. It is also registered in Grenada as a Non-Governmental Organization (NGO) in compliance with section 328 of the Companies Act 1994, and in 1999 it was registered in the United Kingdom as a charitable Trust, Charity in compliance with UK Charities Act 1993.

St. George’s University Partners with Global Health Organizations to Address...
Scroll to top
Our fall term starts online this August for all students!   View FAQs      |      I do not have an MCAT score. Can I still apply?   Learn More
This website uses cookies to provide necessary site functionality and improve your online experience. By continuing to use this website, you agree to our use of cookies. View Our Privacy Policy
Accept