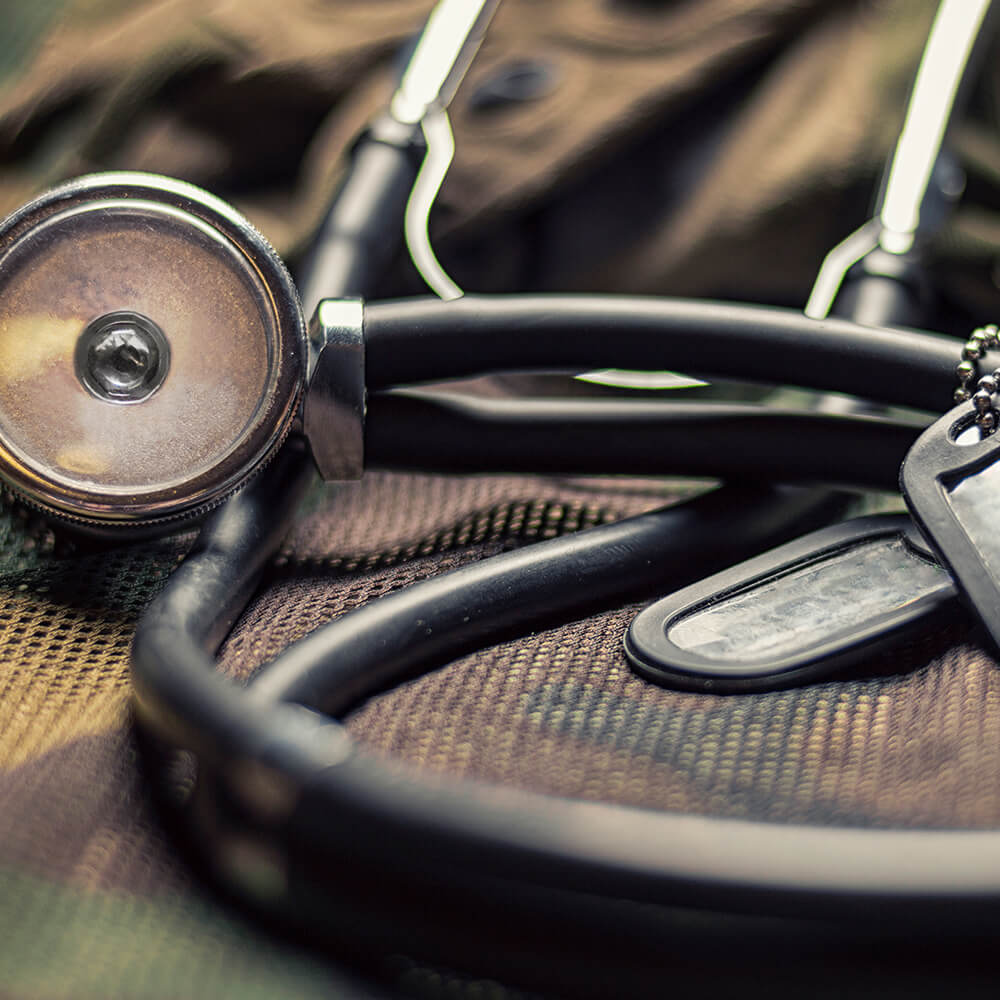 Becoming a doctor after the military can be a great choice for veterans who are passionate about medicine. In fact, many of the skills service members work to develop during their time in the armed forces—teamwork, communication, and composure—are essential for being good physicians.

Just consider these SGU graduates who transitioned from military to medical school. Their stories can help illuminate the possibilities for veterans who are motivated to succeed in a Doctor of Medicine (MD) program, residency, and beyond.

Find inspiration from these SGU success stories of former service members who transitioned into a career in medicine.

1. Constructing a path toward an impactful career

Some pre-med students focus on little more than their studies during college, but that’s not the case for every future physician. Despite knowing she wanted to pursue a medical career at age 16, Dr. Melinda Hansen, a psychiatrist and St. George’s University (SGU) graduate, decided it better to enlist in the US Army. She made the choice after meeting an influential service member and recognizing that she could strengthen her med school applications by gaining medical experience in the military.

“I explored my options within the military and felt that the Army National Guard was the best fit for me as I could simultaneously pursue my undergraduate degree while serving my country as a combat medic,” she explains.

Dr. Hansen’s role in the military involved providing support for weapons ranges and field training exercises, which included a substantial amount of emergency medical care. Upon being honorably discharged, she applied to medical schools and ultimately enrolled at SGU. It was during her first clinical rotation that Dr. Hansen realized her passion for psychiatry.

“Each subsequent rotation revealed a dire need for more mental health practitioners as well as my own innate talent for psychiatry,” Dr. Hansen reflects.

Now a locums tenens psychiatrist at a maximum-security men’s state prison in Los Angeles county, Dr. Hansen is responsible for about 200 inmates for whom she provides psychiatric evaluations, psychotherapy, and medication management. It’s clear that she has the skills and confidence to excel in intense situations, and she largely credits her military experience.

“I learned to conduct myself with integrity, adaptability, and a sense of purpose,” Dr. Hansen says, “which has in turn given me the skills to excel in any setting, including those typically dominated by men.”

As for other service members who want to become physicians, Dr. Hansen encourages them to move forward. “If you have excelled in the military, you will fly through medical school using that same discipline and perseverance that was essential during your service career,” she states.

Medicine is an ideal field for those who are eager to continually grow their knowledge. Just consider former US Air Force pilot and SGU graduate Dr. Cholene Espinoza. While she jokingly refers to herself as a late bloomer, Dr. Espinoza’s perpetual career transitions—first to a commercial pilot, then a journalist, and later an obstetrician/gynecologist (OB/GYN)—prove she’s passionate about lifeline learning. In fact, she recently shifted her focus yet again.

“I worked out in LA for a year before COVID inspired me to do a one-year fellowship in surgical critical care,” Dr. Espinoza says.

Dr. Espinoza is passionate about providing exceptional patient care, which really carries over from her desire to perform at the highest possible level while in the US Air Force. Her time in military also helped in developing numerous other skills that still serve her to this day, such as the ability to navigate the unknown. She also credits SGU with helping to fine-tune her abilities as a physician.

“There’s not really a day that goes by that I don’t think of something that I learned at SGU, either in the classroom or during clinicals,” Dr. Espinoza says.

While Dr. Espinoza might seem fearless, it’s more accurate to say that she doesn’t allow self-doubt to hold her back. If you’re questioning whether you can make the transition to medicine, just heed her words.

“The most important things I’ve done in my life all caused me to have butterflies,” Dr. Espinoza reflects.

Becoming a doctor was a natural choice for Dr. Dustin Blodgett, an SGU graduate and psychiatry resident physician at the University of Kentucky College of Medicine, who first became interested in medicine during first grade. While he never forgot about that passion, his desire to see new places and gain other experiences led him to a career as pararescue specialist in the US Air Force. The role entailed transporting injured solders safely back from enemy territory.

“Every time the siren rang, you knew you were putting yourself in harm’s way,” Dr. Blodgett says. “But if you did your job, you could save a lot of people.”

Despite his natural inclination to help others, Dr. Blodgett needed to shift his focus inward after discovering he was diagnosed with melanoma. He returned to the US with his family to undergo treatment. During that time, he finished his bachelor’s degree and began seriously considering his options for becoming a physician.

“I’d gotten into US medical schools,” Dr. Blodgett says. “But it was a very easy decision to go to St. George’s University. I wanted to see the world.”

Now back in his home state of Kentucky for residency, Dr. Blodgett wants to give back to his community by specializing in child psychiatry to support adolescents experiencing issues with substance misuse.

“The trust that patients have in their doctors is very unique and special,” Dr. Blodgett explains. “I want to have those conversations with young adults who struggle with mental health as I did when I was a kid.”

Facing challenges helped motivate Dr. Darren Cuthbert, an SGU graduate and emergency physician for the US Army Reserves and Envision Physician Services, to succeed. While Dr. Cuthbert experienced difficulty with his academic performance following his father’s death and his mother’s battle with cancer, his parents’ work ethics inspired him to enlist in the US Army and obtain his bachelor’s degree. It was around this time that Dr. Cuthbert began working at St. Barnabas Medical Center and developed an interest in emergency medicine.

“It doesn’t matter who you are or where you’re from—it’s your right to be cared for in the ER, which also shows the humanistic side of medicine,” Dr. Cuthbert says.

Dr. Cuthbert eventually enrolled in SGU’s MD program, but only after he had graduated with a Master of Public Health (MPH) from St. George’s University. He has absolutely no regrets about the decision.

“Not only does having an MPH make you stick out as a leader amongst your peers,” Dr. Cuthbert reflects, “but it broadens your horizon of the world and medicine, eventually creating a better doctor and scientist.”

Dr. Cuthbert takes his role as a leader in medicine seriously as well. He relates to the individuals he cares for—and not just those who are connected to the military.

“When you treat patients, you see something you love in those people—the good traits, the human characteristics,” Dr. Cuthbert explains. “It’s not really a patient; it’s someone’s mom, someone’s child, brother, or sister.”

Go from military to MD

For veterans like the ones above, transitioning from military to medical school provides an opportunity to serve in a new and meaningful way. If you’re interested in pursuing a physician career, you might want to start thinking about applying to programs that value your unique background.

Find out how you can start medical school as a veteran.

Want to find out how you can become a physician?

Fill out this form to learn how you can start your medical education. You’ll hear from an SGU admission representative and also receive a packet of information about the School of Medicine.

Fill out my online form.