Most children adjust their plans for the future when they realize how difficult it is to become an astronaut or professional athlete, but you’ve never wavered on your goal of becoming a doctor. You aren’t willing to give up on your dream just because the road to medical school and residency is rigorous.

Though you’re committed to a career as a physician, it’s clear that getting into medical school is going to be a challenge. You can’t help but wonder which programs make the list of easiest medical schools to get into. You think perhaps a school in the Caribbean or a newer program would fit the bill.

On the other hand, you want to make sure you acquire a quality education that will set you up to become a practicing physician. Is a program with looser applicant requirements lower quality? Is getting into medical school really easier at that type of program in the first place? We’re going to start with the second question.

Is there really such thing as a medical school that’s easy to get into?

The answer to this is a little more complicated than you might expect. Some schools are definitely a bit easier to get into, but it depends on both the program and the applicant.

Dr. Andrea Paul, co-founder and Chief Medical Officer for BoardVitals, mentions state schools that reserve spots for local students as an example. She says an applicant who demonstrates a desire to practice as a physician in their home state after graduating and completing residency will typically have an advantage over others.

From a numbers perspective, we can see that location really does make a difference. According to the Association of American Medical Colleges (AAMC), 24.8 percent of applicants matriculated in state for the 2018–2019 school year compared to 16.1 percent who matriculated out of state. Students who live in a location that’s sparse on schools are at a disadvantage. It’s also worth noting these numbers also indicate that 59.1 percent of applicants—a clear majority—don’t get into a US school at all. 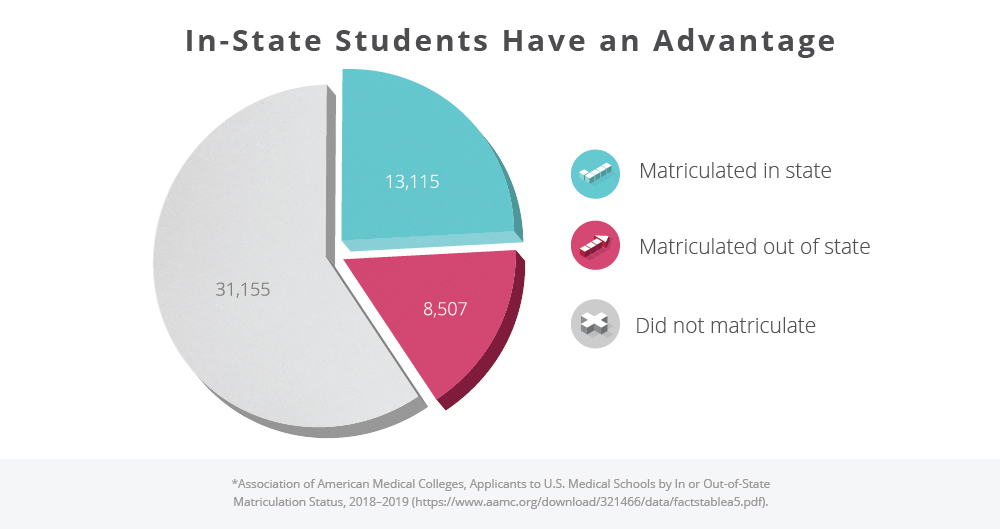 2. Schools have their own evaluation criteria

You should also remember that every medical school program reviews applicants differently. While some look for those with the highest grades and test scores, some weigh other factors more heavily.

“Some schools are looking for people with more diverse academic backgrounds,” Dr. Paul explains. In this case, students with less common undergraduate degrees may have a leg up. But that also means good students who went the typical pre-med route during college could struggle to make their case during the admission process.

Schools that holistically review applicants per the AAMC’s guidelines consider experiences and attributes in addition to academic metrics. They want to make sure admitted students have what it takes to be successful. Race and ethnicity may also be considered, but only when permitted by state law.

3. It’s getting tougher for everyone

Yes, some students will have an easier time getting into certain medical schools. But easier isn’t the same as easy. By and large, it’s becoming more and more difficult to gain a medical school acceptance letter.

From 1999 to 2018, the number of medical school applicants increased from 38,443 to 52,777. Matriculants only increased from 16,221 to 21,622. The growth in students is far outpacing the growth in seats offered. This means qualified individuals can easily fail to gain acceptance. 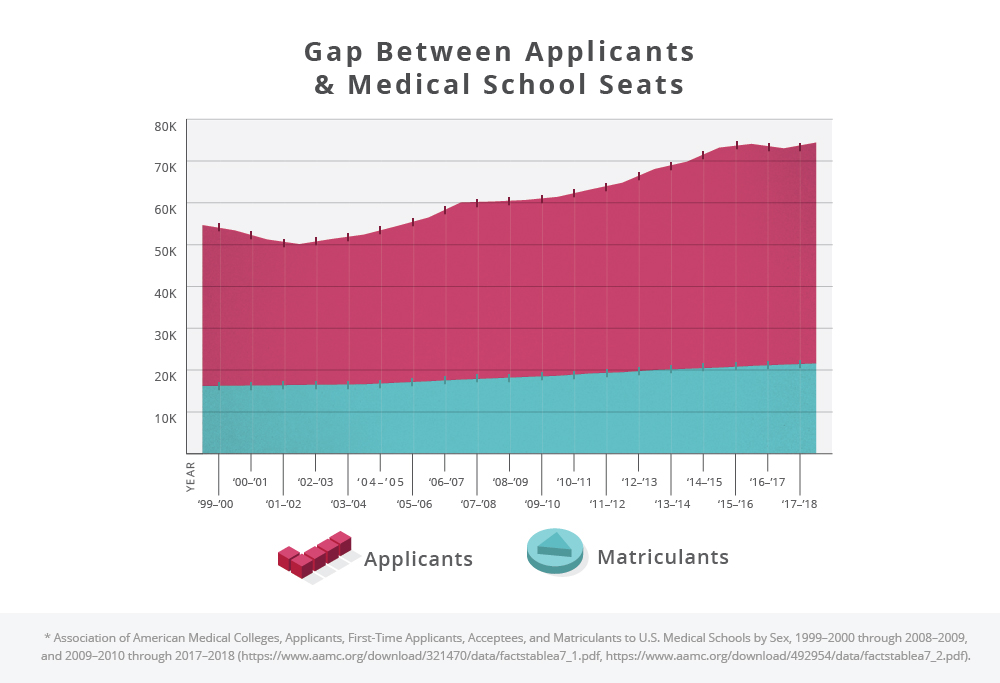 5 myths about the “easiest” medical schools to get into

As you can see, labeling a school as “easy to get into” can be true in some circumstances and false in others. Join us as we examine some of the rumors you may have heard about medical schools where certain applicants have an advantage.

1. Students with remarkably poor academic performance can get in

It’s true some medical schools are not as strict about academic metrics as others. This does not mean the program is lacking or that the students aren’t qualified. “Some schools have lower GPA and MCAT scores because of lower geographic desirability,” Dr. Paul explains.

You should also consider what “low” means for accepted medical students. The Association of American Medical Colleges (AAMC) lays out a grid that gives a good sense of where US applicants stand based on academic metrics. Though there are certainly students who get accepted with a GPA lower than 3.0 and an MCAT score well below 500, but the chance of getting into any medical school is better when performance is stronger.

As we mentioned earlier, academic performance doesn’t tell admissions teams everything they need to know when evaluating prospective students. This explains why some applicants get accepted despite a bad semester in college or a less impressive MCAT score. Dr. Paul says your work experiences, volunteering, and letters of recommendation can also play a big role in a medical school’s decision to accept you or not.

2. No one will look at the specific undergrad courses or degrees you completed

Nearly every medical school looks at GPA in two ways: total and science-specific. A student with a 3.7 who struggled a bit more in math and science might raise more red flags than a student with the same GPA who was strongest in those particular subjects.

Some programs analyze your end-of-school performance even more critically. “Oftentimes, we look at the last 45 credits,” explains Bob Ryan, Dean of Admission at St. George’s University (SGU). He adds they like to see upward trends in grades as a student nears the end of their college career.

You should also know an online undergraduate degree likely won’t cut it. Completing a program that doesn’t involve interacting with faculty and other students just doesn’t prepare students for medical school in the same way a traditional classroom setting does. “How are you going to suddenly acclimate to a university life?” Ryan asks.

3. Weaker students will be weeded out

You may have heard the rumor that some medical schools accept a lot of students with the intention of eliminating those who perform poorly. According to U.S. News & World Report, program faculty actually work very hard to ensure this doesn’t happen. Dr. Paul says many medical schools allow students time to retake courses if needed.

“There is a ‘weeding out’ of sorts that occurs organically, as with any other high-demand training,” Dr. Paul explains. “But it definitely is not something that a school intentionally does.”

4. Graduates from these schools are less likely to match

The name recognition that comes with attending a well-known medical school can play a role in successfully landing a residency. But you shouldn’t feel discouraged if you were accepted into a program that didn’t have quite such strict requirements. In fact, a recent survey shows residency program directors weigh your USMLE Step 1 scores, letters of recommendation, and Medical Student Performance Evaluation much more heavily than they weigh where you went to medical school.

Clearly, your performance in medical school and the way you communicate can make up for attending a program that residency directors might question. “Smaller, newer, or lesser-known medical schools may mean that you need a slightly higher USMLE score or to prove yourself more via your letters of recommendations and interview skills,” Dr. Paul notes.

If you’re concerned about your chances of matching after medical school, ask the admissions department for their residency match information. You can see what percentage of students were placed and where they ended up.

5. The instructors would rather be at a more prestigious school

It isn’t fair to judge an instructor based on whether they’re located at a well-known medical school. Faculty make decisions about where they teach similarly to the way prospective students determine where to attend school. For both students and instructors, teaching philosophy plays a big role in finding the right institution.

Clearly, seeking out the easiest medical schools to get into isn’t quite so easy. There’s a lot that goes into it, and getting accepted to any program is an achievement you should be proud of.

Your best bet for getting into medical school is to put together a strong application. Grades are part of this, but there are numerous ways you can demonstrate why you would make a great doctor.

Learn more about how to make yourself stand out by reading our article, “Medical School GPA: Why Good Grades Are Only Part of the Equation.”

*This article was originally published January 2018. It has since been updated to include information relevant to 2019. 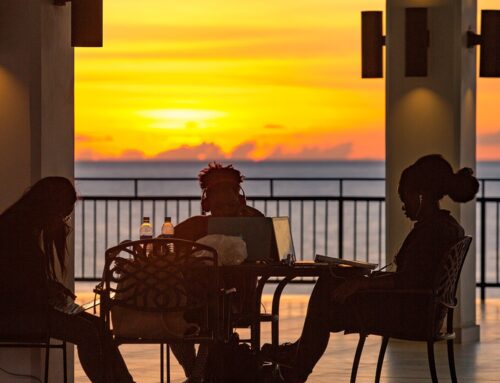 10 Surprising Facts About the SGU School of Medicine 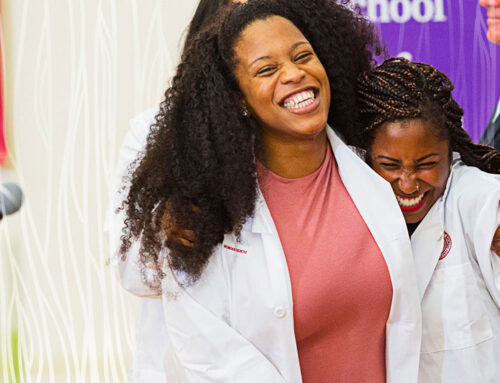 The Truth About Caribbean Medical Schools: Debunking the Myths 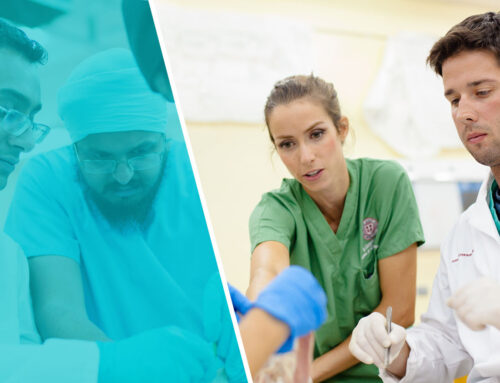 A Look at Medical School Curriculum by Year