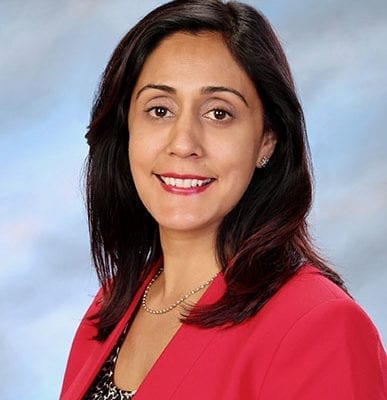 Dr. Sherry Singh, MD SGU ’00, was appointed an Assistant Dean of US Clinical Studies at St. George’s University in January 2016. She has developed and directs the University’s Clinical Student Support Program and serves as Manager for its Student Advocacy Program. Previously, Dr. Singh had been a Senior Advisor in the University’s Office of Career Guidance and Student Development for eight years. She had worked as a Teaching Attending at Long Island College Hospital, Brooklyn, NY, from 2005-2008, where she first became involved with precepting SGU students. During her time there, Dr. Singh was actively involved in teaching both the residents and the medical students. She also served on the Residency Review Committee, Medical Executive Committee, and helped to further develop the Academic Hospitalist Program.

A 2000 SGU graduate, Dr. Singh came to Grenada after earning her Bachelor of Science in biology from Simon Fraser University in Burnaby, British Columbia. After earning her Doctor of Medicine, she completed her internship year at Cooper before finishing her internal medicine residency at University of Massachusetts Medical Center in Worcester, MA. She went on to practice internal medicine for UMass Memorial Medical Group and Long Island College Hospital before assuming her current position at Cooper University Hospital.

Brendon L. La Grenade
Scroll to top
Our fall term starts online this August for all students!   View FAQs      |      I do not have an MCAT score. Can I still apply?   Learn More
This website uses cookies to provide necessary site functionality and improve your online experience. By continuing to use this website, you agree to our use of cookies. View Our Privacy Policy
Accept