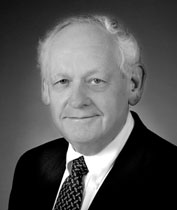 His academic training and professional interests prepared him for leadership roles in the Texas Veterinary Medical Association and the American Veterinary Medical Association (AVMA). Dr. Russell held multiple positions in these organizations culminating with the Presidency from 1984-1985 and 1993-1994. Having served in veterinary leadership positions at the state and national levels, he was encouraged to represent his profession internationally. He was chosen by the AVMA Board to represent the United States at the World Veterinary Association (WVA), where he was elected WVA Vice President in September 2002 and became the WVA’s Liaison Officer to the World Health Organization (WHO). In 2005, he was elected President of the WVA at the 28th World Veterinary Congress in Minneapolis, Minnesota.