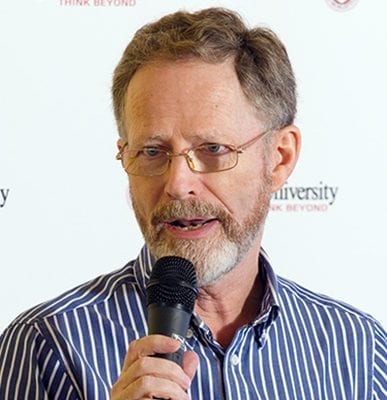 Dr. Hugh Ferguson is Professor of Pathology (part-time), and formerly Chair of the Department of Pathobiology, with main teaching and research activities in the Marine Medicine Program. He is also a Senior Research Fellow in WINDREF, the Windward Islands Research and Education Foundation located on campus.

Dr. Ferguson consults and teaches internationally and is author and co-author of more than 220 scientific papers and books, most of which concern diseases of fish. He is also author and editor of the standard textbook “Systemic Pathology of Fish” Scotian Press, London, 2006.

Dr. Ferguson earned his veterinary degree from the Royal (Dick) School of Veterinary Studies, Edinburgh, Scotland and held a Wellcome Fellowship at Stirling University where he obtained his PhD. He subsequently worked as a diagnostic pathologist at Veterinary Research Laboratories, Stormont, Belfast, Northern Ireland for four years prior to moving to Canada. He is board-certified in veterinary pathology, and is a Fellow of the Royal College of Pathologists (London).

Trevor Noel
Scroll to top
Our next term begins this August!   View FAQs