Over a military career that has lasted more than a decade, through tours in Iraq and Afghanistan, Peter Fish, MD SGU ’13, wrote down his thoughts and his experiences as a flight surgeon and base medical officer in the United States Army. The result was the Army Medical Officer’s Guide, a book that Dr. Fish calls a “cultural guide” for civilians who are entering the military medical corps. It has been well received by the military, so much so that copies are given to all new medical recruits. 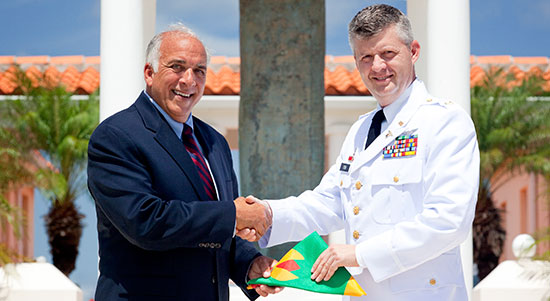 “It’s very humbling,” said Dr. Fish, now a second-year internal medicine resident at St. Peter’s University Hospital in New Jersey. “Anybody who’s anybody in the military has read the Army Officer’s Guide – Patton read that book – and to be on the same bookshelf as that book is a tremendous feeling.”

The book covers everything from the history of the medical corps, how it is structured, and how it is different philosophically from civilian medical providers. It goes over customs and courtesies as well as professional development tips, social parameters, and benefits of being in the military. It also provides a comprehensive checklist for a deploying officer.

The idea to write the Army Medical Officer’s Guide came to him in 2002. He jotted down notes – “back of envelope type stuff” – over the years and developed an outline by 2012, his third year at SGU. In addition to his own notes, Dr. Fish spent countless hours interviewing military officers, who provided additional points and perspectives. By December 2013, a rough draft had been completed, and the book was published in March 2014.

“Just from my experiences overseas with other medical officers, there were things I learned that I knew would be helpful for other people,” Dr. Fish said.

Before he was a doctor, he worked for National Geographic and the National Science Teachers Association as a production editor. He eventually enrolled at and graduated from Yale School of Medicine’s physician associate program and launched his military career as a PA with the Connecticut Army National Guard in 1999. After five years, Dr. Fish sought more responsibility in the medical field, which led him to apply to St. George’s University.

On the day he learned of his acceptance to the School of Medicine, he also found out he was being deployed to Iraq. Medical school had to wait. After a year-and-a-half stint with 466 ASMC Combat Hospital in Tallil, he returned home briefly before joining SGU’s Charter Foundation Program. He called the experience a “reality check.” 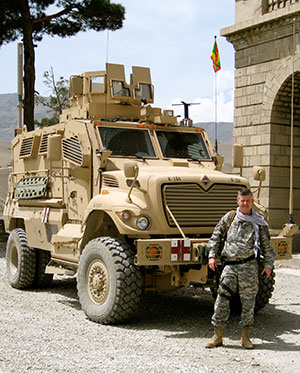 “If I had gone directly into first term of medical school, I would not have survived,” Dr. Fish said. “Coming back from Iraq, you can’t be more cocky than I was. I had been a PA for forever, and my mindset was that nobody could teach me anything. After my first exam or two, though, I realized that, in that world, I had better shape up or I wasn’t going to make it. I studied like I had never studied before in my life.”

After completing the Foundations program and two years of the Basic Sciences, he went on to do his clinical rotations at Richmond University Medical Center on Staten Island. Between his background as a PA and his medical education, he seamlessly transitioned to his new environment and eventually to residency.

“It was really helpful for me to see the motivation of the other students at SGU,” Dr. Fish said. “SGU is competitive in a constructive way. It’s infectious that students there work as hard as they do. The standards there are high, and professors believe in their students. It was also great to be down there with a mix of people from all over the world. I learned as much from that as anything else.

“I look back on the things that I’ve done and I’m pretty amazed about the opportunities that I’ve been given,” Dr. Fish said. “Would I like to have been a doctor in my 20s? Probably. But I don’t know that I’d have been as good. I’m a better doctor because I had all these things that grew me up first, and I think that shows on the floors.”

He hopes the Army Medical Officer’s Guide shines light on some of these experiences so that prospective military doctors are prepared to navigate a similar course.

From U-2 Pilot to OB/GYN: A Veteran Reflects on Her Career Path
Scroll to top
Our next term begins this August!   View FAQs