When Cholene Espinoza, MD SGU ’15, looks back on her childhood, she remembers imperfections and failure.

“I was always kind of a screw-up as a kid,” said Espinoza, chief resident in Cedars-Sinai’s Department of Obstetrics and Gynecology. “I started first grade when I was five, so I was always feeling behind and was often put in the corner for being disruptive in class. I was independent and never really fit in to the traditional educational system.”

For years, Espinoza struggled to focus academically and socially, but the summer before seventh grade, she had an epiphany: “I remember telling my mom I didn’t want to be a loser anymore.”

She hasn’t let her mom down. Espinoza’s stellar career and life have played like a Hollywood movie with her roles including—an elite spy plane pilot; a passenger originally scheduled to board one of the ill-fated planes on 9/11; a wartime journalist; a Hurricane Katrina volunteer; a published author and, finally an OB-GYN who has a profound reverence for human life.

As Veterans Day approaches, Espinoza, an Air Force veteran, reflected on the meaning of the day and how her own service changed her life and set her on her path to becoming a physician.

“What is would say to veterans is, ‘thank you. We’ve served together, you kept me safe and there’s not a day that goes by that I don’t appreciate you in every way,” Espinoza said.

At 17, Espinoza enrolled in the United States Air Force Academy in Colorado Springs, Colorado. In the 1980s, when she was a young cadet, the Academy limited female enrollment to just 10 percent of a class. (With those gender restrictions now gone, last year’s freshman class at the Academy was about a quarter female.)

“Like anything in life, there were moments when I struggled, and things or comments happened that shouldn’t have,” she said. “But it taught me to surround myself with supportive, good people and to work through the hardships.”

But more hardships were to come. Around Christmas of her sophomore year, Espinoza’s father died. The shock and grief soon led her to an unexpected, but clear path.

“I was taking a course in glider flying and it enabled me to get over my father’s death on some level,” she said. “Flying came natural to me when nothing else in my life had.”

After graduating, Espinoza served as a flying instructor for four years, and later, she was selected as a U-2 spy plane pilot for the 99th Reconnaissance Squadron at Beale Air Force Base, California–the only U-2 squadron in the world.

U-2 spy planes are single-jet engine, ultra-light gliders that maneuver on the edge of the earth’s atmosphere. Designed to avoid enemy detection, the planes are equipped with sophisticated instrumentation that provides vital intelligence, day or night and in all-weather.

In a 12-hour mission, the aircraft can capture extraordinarily detailed imagery of a country the size of Iraq. And while much about the aircraft remains classified, Espinoza points out the planes do far more than reconnaissance—they also aid in peacekeeping and directing humanitarian aid.

Flying solo missions in U-2 plane can be an otherworldly, almost spiritual experience, said Espinoza. Wrapped in the cocoon of her space gear, she can sometimes still feel the stillness of the open sky and the brilliance of the earth.

“I would fly across Europe all night and it felt as though I could just reach out and touch the stars,” she said.

But along with the beauty came harsh reminders of the chaos on the ground.

“I would fly over beautiful civilizations like France and Germany, but when I made it to my target areas, it would be pitch black,” she said. “Then, I would see a flash of light and know it was a blast, and that meant someone is killing or someone is dying. It always gave me reverence for how fragile human life is and how unjust war is.”

Espinoza observed war from the quiet remove of a spy plane, but with each mission she would feel a stronger urge to assist those affected on the ground.

“I couldn’t directly help people from the stratosphere and that propelled me to eventually get out of the Air Force cockpit,” she said.

Espinoza left the Air Force for a career in commercial flying with United Airlines and then Emirates Airlines–allowing her to travel to every continent except Antarctica.

“As a commercial pilot, I had to be broken of my ‘single pilot mindset’ and not disregard input from others,” said Espinoza. “Success was based on the efficacy and quality of the entire crew.”

Espinoza was working for United Airlines on September 11, 2001, when terrorists hijacked four aircrafts and slammed two of them into the World Trade Center, one into the Pentagon and the fourth in a Pennsylvania countryside.

She was not scheduled to fly the fourth plane hijacked that day, but was supposed to be a passenger. The flight boarded in Newark, and was supposed to land in San Francisco. It never made it.

“I was living in New York City at the time and had just accepted a bid to be a captain out of San Francisco,” said Espinoza. “I planned to take the flight as a passenger to find a new home in San Francisco, but the crew desk realized I had gone over my flight limitation hours, so the first leg of my trip was cancelled and I wasn’t on Flight 93.”

“I knew Leroy since I was 17 and had just seen him in London on a layover,” said Espinoza. “He was happier and more content than I’d ever known him to be, showing me pictures of his daughter and wife. I often think of him that day in Hyde Park, with his smile, wishing I’d been there for him on that flight.”

The events of 9/11 soon led her to take a pair of three-month leave from United Airlines to cover the Iraq war as a civilian radio journalist. Her first tour was with the Marine Corps and the second, and third with the Army. Espinoza worked as an embedded journalist for Talk Radio News Service (now Talk Media News), which gave her an opportunity to come face-to-face with war—both its injustice and its heroism.

“I departed Iraq from mobile hospital in Iraq and there were surgeons trying to save children who had limbs blown off from mines and ammunition,” said Espinoza. “The medical teams were trying to make something right out of something so horribly wrong. When you’re in the middle of a war, you see the destruction and insanity of it, and then you see these beautiful acts.”

“In order for me to overcome what war had done to me, I needed to engage and fix what was broken,” she said. “That’s what inspired me to leave the cockpit for good and directly take care of people by switching careers from pilot and journalist, to doctor.”

But before taking care of people as a doctor, Espinoza’s desire to serve brought her to Mississippi’s Gulf Coast in 2005 after Hurricane Katrina.

“On our first trip to Mississippi, my spouse and I connected with a small community and fell in love with the people and their struggle,” said Espinoza. “We realized how many people drowned from the storm because they didn’t know how to swim, since there were no community centers or public swimming pools.”

So, the couple made it their mission to change the community’s access to water safety by raising money to build a public swimming pool. Amid rebuilding and spending all of her down time and vacation days on the Gulf Coast, Espinoza penned a novel, Through the Eye of the Storm: A Book Dedicated to Rebuilding What Katrina Washed Away.

“I realized each of us has something to give and that gift is desperately needed in our world,” said Espinoza. “For me, being gay had not stopped me from serving two of my greatest loves in life, God and country. This book is the story of my life, the lives of truly heroic Americans and the transformation of my spirit that took place unexpectedly in this small Mississippi town.”

The proceeds raised from the book, which she wrote and published in less than one year, supported the rebuilding of one of the most hurricane-ravaged communities on the Gulf Coast. The writing process helped Espinoza accept herself completely.

“It wasn’t until I was out of the service that I wrestled with my own identity,” said Espinoza. “In the service, I didn’t have relationships with women, I focused on flying. I had tried to deny that part of who I was but realized through the writing and humanitarian process a stronger desire to live authentically.”

Becoming a Doctor: Her Final Mission

In 2009, after what many would consider an already fulfilling and long career, Espinoza started her journey of becoming a doctor. Then 45 years-old, Espinoza started over with preclinical and then graduated from St. George’s University School of Medicine in Grenada, West Indies at the age of 50.

“I have the distinction of starting menopause and residency at the same time,” Espinoza jokes.

Espinoza started her residency training in Obstetrics and Gynecology at Cedars-Sinai in June 2015 and is scheduled to finish this coming June. She has been accepted to be re-commissioned into the military as a Reserve U.S. Army OB-GYN. She can be deployed to any medical surgical unit, nationally or internationally.

“Military medicine is what first inspired me, but I thought I was too old for the military,” said Espinoza. “But they desperately need doctors.”

While she’s not serving on Reserve duty, Espinoza plans to work in South Sudan, a struggling country where she has been working and traveling for over six years–first being trained by the South Sudanese when she was a medical student–not teaching and practicing as a doctor.

“With each trip, I can do more, because I’ve learned more here at Cedars-Sinai.”

Above all, residency has been the challenge of her lifetime.

“With medicine and obstetrics specifically, there are no permissible errors,” said Espinoza. “It’s the same as flying jets–there is a certain level of intensity and desire to execute perfection, which drives and motivates me to work harder every single day.”

But, as Espinoza knows, whether in war or in medicine, mistakes are inevitable.

“I start each day with a sense of humility and respect for human life and for people across all socioeconomic levels,” she said. “That humility comes from seeing a lot of bad things happen and knowing I, too, have made mistakes. But every day is an opportunity to try to do better, let go and forgive ourselves.”

And at a time in her life when many people would be slowing down, Espinoza is relishing her uncharted journey ahead.

“I have been blessed with a rich life and experiences, but without question–the most magical, beautiful thing I have ever experienced in my life or career is being in the room when a baby is born,” she said. “Any pain, loss, or hurt parents may have previously felt evaporates the split second their baby is born. Witnessing and participating in birth is the privilege of a lifetime.”

This story, video and photos originally appeared on the Cedars-Sinai Medical Center website. They have been published here with permission from Cedars-Sinai. 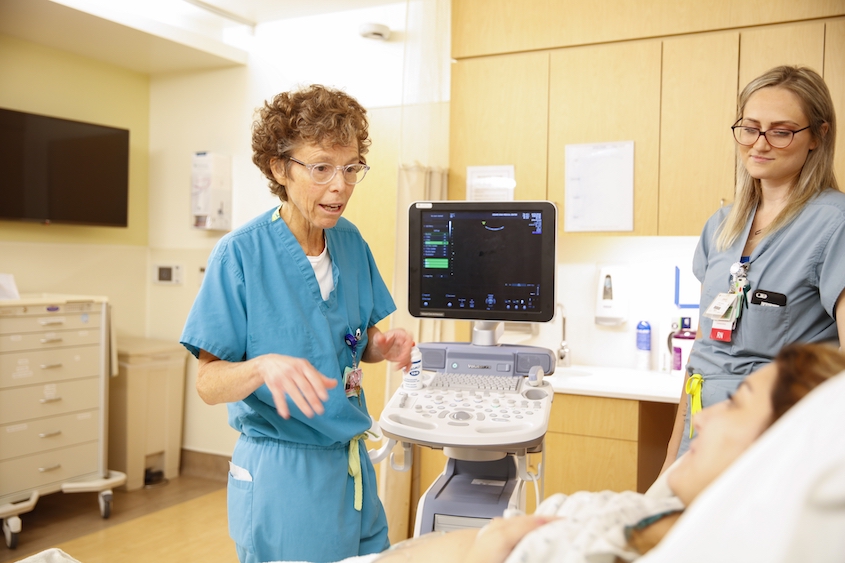 Keith B. Taylor Global Scholars Program Hosts British Association of Clinical...
Scroll to top
Our next term starts this January for all students!   View FAQs      |      I do not have an MCAT score. Can I still apply?   Learn More