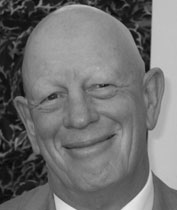 From 1983 until his retirement in 2010, Dr. Andrew Johnson worked as a Consultant Physician in general internal medicine, specializing in respiratory disease at Kent and Canterbury Hospital. During this time he enhanced the respiratory department, introducing new techniques and expanding the personnel. In addition to local, regional, and national management advisory positions, Dr. Johnson was secretary to the research committee of the British Thoracic Society, leading several research projects. He has published more than 30 original research papers in peer-reviewed journals.

Dr. Johnson was invited to take the post of Director of Medical Education for St George’s University School of Medicine at Kent and Canterbury Hospital in 1989. He has also contributed to teaching physical diagnosis on the islands and the advisory structure of the University. Dr. Johnson has witnessed St. George’s University evolve over the years, expanding enormously in numbers, quality, and structure.

Dr. Johnson was born in South Wales shortly after World War II, and he graduated with distinctions in social medicine and public health from the University of Wales in 1969. Following his residency, he was appointed Registrar in Thoracic Medicine at the Brompton Hospital, London where he also lectured in clinical pharmacology and conducted research on asthma. Upon completing his final year of residency in Edinburgh, Scotland, Dr. Johnson secured a position as a George Sexton Research Fellow at the University of British Columbia to study occupational lung disease for one year.

Dr. Johnson lives in Canterbury with his wife, Jean. Dr. Andrew Johnson has four children, two of whom are in the medical profession, and he is expecting his first grandchild to further enhance his retirement.

Douglas A. Freeman, January 2017
Scroll to top
Our next term begins this August!   View FAQs