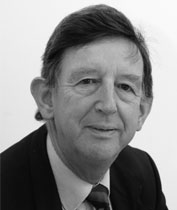 Dr. Powell-Jackson was a Consultant Physician for 31 years in Winchester, England and now serves as St. George’s University’s Associate Director of Clinical Guidance in the United Kingdom.

Dr. John Powell-Jackson previously worked among the Massai people for the African Medical and Research Foundation (AMREF) and was awarded a Nuffield Travelling Scholarship to study tropical medicine at Hong Kong University. He was educated at Gonville and Caius College, Cambridge and Guy’s Hospital, London and qualified as a doctor in 1966. He was a clinical research fellow at the Medical Research Council Blood Pressure Unit in Glasgow from 1971-1973, investigating aspects of the rennin-angiotensin system and completing his MD thesis. In 1973 he resumed his medical training at Guy’s Hospital until, in 1976, he was appointed Consultant Physician to the Royal Hampshire County Hospital.

As clinical tutor responsible for undergraduate education, he came into contact with St. George’s University medical students in 1980 and has taught successive generations ever since, alongside students from Southampton University Medical School. Dr. Powell-Jackson served as St. George’s University Director of Medical Education and was appointed honorary Senior Lecturer in Medicine at Southampton University. He was also Wessex Regional Advisor in Medicine to the Royal College of Physicians in London. The fields of general internal and cardiovascular medicine are his primary clinical interests, and he has published articles relating to hypertension and prion diseases. His recreational interests are cricket (tours to Kenya, Malaysia, South Africa and Zimbabwe), wine tasting and travel.

First I would like to thank Dr Martin Stransky for his kind words of introduction.

It is an honour and a privilege to address you today on what is an important and memorable occasion especially for the White Coat Students. You are the 5th Class to enter the Keith B Taylor Global Scholars Basic Science Programme; this class numbers 104 students and you come from 21 countries.

The programme is a unique international collaboration between St George’s University School of Medicine and Northumbria University. It is named after the late Keith Taylor who was Vice Chancellor of St George’s University from 1991 – 1998. Before that he was a Professor of Medicine at Stanford spending 30 years studying the way the body absorbs vitamin B12. At St George’s he helped create a dynamic research centre, WINDREF and he was instrumental in transforming a fine Medical School into an International University. He would have enjoyed this occasion and you would have enjoyed meeting this wise and kind physician whose name will always be associated with International Medical Education, a subject close to his heart. On his behalf I would like to congratulate all the White Coat Students for reaching this important milestone in your careers.

Now, I want to tell you the stories of two of my medical heroes. One is an Australian, the other a Canadian. The first illustrates the role that science and a little luck plays in medical discoveries and the second the way in which the practice of medicine is an art. I hope they inspire you as much as they have inspired me.

Let me set the scene. Peptic ulcers, gastric and duodenal ulcers were rare until the start of the 20th century when they became ever more frequent, affecting up to 1 in 10 of adults. The popular belief was that they were related to an excess of acid production in the stomach brought on by stress, faulty diet, and genetic factors but the cause was unknown. Treatment, in my day as a medical student, was bed rest, antacids and sometimes referral to surgeons for partial gastrectomy. Ulcers tended to occur in middle life when people were at their most productive so there was an economic impact nationally as well as individual suffering. In the 1970s drugs were introduced that reduced acid secretion in the stomach and allowed ulcers to heal. But when the drugs were stopped the ulcers came back.

Barry Marshall was born in Western Australia in 1951 and after graduating from medical school in Perth became a junior doctor in gastroenterology in the early 1980s. He wanted an interesting research project and came into contact with a colleague Robin Warren who as a pathologist had observed small curved bacteria in stomach biopsies taken from patients with acute gastritis. Neither knew the significance of these findings.

Then, quite by accident, one of the patients whose stomach biopsy had contained the unidentified bacteria reported that following a course of antibiotics for a chest infection, his indigestion had improved. Barry Marshall promptly performed an endoscopy to inspect the stomach wall and found the bacteria had disappeared.

Since the patients’ symptoms and the bacteria in the stomach had vanished after antibiotics, he drew the obvious conclusion that the organisms might have been the cause of those symptoms.

This revelation sparked a flurry of excitement and activity. Over the next 12 weeks Dr Marshall performed gastroscopies on many more patients and found a high prevalence of bacterial infections in those with gastritis and in every single patient with peptic ulcer.

The next step was to grow the organism on a culture dish but this proved surprisingly difficult. Usually cultures are incubated for 48 hours after inoculation but nothing grew. The 35th attempt was interrupted by an Easter break and unintentionally the dishes were incubated for an extra three days. When the microbiologists returned from their vacation the culture plates were studded with small colonies of helicobacter.

It is at this point, in the summer of 1984, that Barry Marshall became a real hero. He had to prove or disprove the idea that bacteria found in association with an illness were actually the cause of that illness. In the great tradition of self experimentation he swallowed a cocktail containing large numbers of organisms which had been obtained from the stomach of a man suffering from indigestion. Within a week he developed abdominal discomfort, vomiting, dyspepsia and to his wife’s and his friends dismay severe halitosis. His breath smelt putrid. A colleague found his stomach lining red and inflamed and a biopsy showed inflammatory cells with bacteria adhering to the surface. After taking a course of antibiotics his symptoms quickly resolved.

Case proven you may think.

The initial reaction of doctors worldwide was utter disbelief. Why had this connection never been made before? Pathologists must have seen bacteria in stomach biopsies but ignored them because the prevailing wisdom suggested organisms could not survive in an acid environment. Marshall had proved them wrong. He stuck to his guns, absorbed all the criticism convinced that he was right.

It was another 10 years before this research was adopted into mainstream medical practice. Nowadays gastroenterologists routinely look for helicobacter and cure peptic ulcers with antibiotics so that they don’t recur. Gastric Surgeons rarely need to operate for ulcer disease and the outcome for patients has been transformed.

In 2005 Barry Marshall and Robin Warren were awarded the Nobel Prize for medicine for their work.

Here is an example of healthy scepticism and an inquiring mind plus an element of luck producing an important medical discovery. Dr Marshall was able to think the unthinkable that peptic ulcers might be an infectious disease. It raises the question that other diseases such as multiple sclerosis and ulcerative colitis may have a biological cause making them amenable to curative treatment. Here are some opportunities for your generation.

I want to move on to my other hero, a Canadian by birth who became a Professor of medicine at the early age of 25 and spent most of his working life in the USA and England. He wrote a textbook of medicine single handed and was the outstanding physician in his day and generation. His influence was irresistible partly due to his intellectual gifts but also the magnetic charm of his personality.

His name was William Osler.

As a boy he thought of going into the church following his father but his love of natural history and science led him to medicine. For this he was well fitted having a sympathetic nature, a genius for friendship and capacity for teaching and organisation. He went to a private medical school in Toronto thence to McGill University in Montreal where he qualified. After postgraduate studies in Europe he returned to McGill where he became Professor of medicine. From McGill he went to Philadelphia and six years later founded, with others, a new medical school in Baltimore, The Johns Hopkins which he soon made famous. In 1905 he was invited to become the Regius professor of medicine at Oxford, a post which he held until his death during the Spanish influenza pandemic in 1919.

What were his contributions and why was he so revered?

He made some interesting observations on some rare diseases that you will all learn about in the next few years. These facts do not explain his unique influence. Of greater importance were his insistence that medical students learn at the bedside and young doctors live in the hospital as interns and residents. He started up formal journal clubs, loved books and libraries and advocated that learning should be life long.

However his outstanding characteristic was his humanity. There is a well known story of him giving his cloak to a beggar one night who in return bequeathed his liver, rendered cirrhotic by alcohol, to his good friend William Osler. His home was known as “The Open Arms” and his hospitality was boundless.
Incidentally Lord Walton was recently the Warden of that home at 13 Norham Gardens in Oxford and visitors are welcome to view the library and memorabilia.

Nothing pleased him more that teaching students such was his enthusiasm, knowledge of his subject and sense of obligation. He said farewell to his students and colleagues in Philadelphia with these pearls of wisdom, which are equally relevant today.

“In the physician or surgeon no quality takes rank with imperturbability. Imperturbability means coolness and presence of mind under all circumstances, calmness amid the storm, clearness of judgment in moments of grave peril, immobility, impassiveness. It is the quality which is most appreciated by the public though often misunderstood by them; and the physician who has the misfortune to be without it, who betrays indecision and worry and who is flustered in ordinary emergencies loses rapidly the confidence of his patients.”

Osler goes on to say “as imperturbability is largely a bodily endowment I regret to say that there are those among you, owing to congenital defects who may never be able to acquire it. Education however will do much and with practice and experience the majority of you will attain a fair measure”.

“Secondly there is a mental equivalent, equanimity or evenness of mind which is as important as the bodily endowment. You cannot hope to escape entirely from the cares and anxieties of professional life. Stand up bravely even against the worst.” In other words keep a steady temperament, avoid getting over excited or too despondent when things go wrong.

William Osler certainly possessed the gift of equanimity such that he bore success with humility, the affection of his friends without pride and when the day of sorrow and grief came with the loss of his only son in World War One he met it with courage.

I wish you all well on the journey which is just beginning. It will be exciting and fulfilling and I would relish the opportunity to join you. Remember that universities are not places just for acquiring knowledge; they are for learning how to think and reason. The friends you make at medical school over the next 4 years will endure for life.

I will leave you with a final quote from Osler. “My belief (is) that the real work of life is done before the 40th year and that after the 60th year it would be best for the world and best for themselves if men rested from their labours”.

I will take his advice and do just that.

Thank you for your attention and good luck to you all.