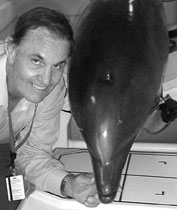 Dr. Ridgway earned Bachelor of Science and Doctor of Veterinary Medicine degrees from Texas A&M University. He earned his PhD in neurobiology from the University of Cambridge in England.

In the 1960’s, Dr. Ridgway pioneered dolphin anesthesia, medical technology, and methods for studying trained dolphins swimming freely in the open sea. His discoveries have been published in leading scientific journals such as Science, Nature, Journal of the Acoustical Society of America and Scientific American. In 1965, his work on marine mammal diving was transitioned for use in the Navy SEALAB II project; and in 1969 to a system employing California sea lions, which is used to this day in various Navy recovery tasks. At the suggestion of Capt. George Bond, Medical Director of SEALAB, in 1966 Dr. Ridgway began preliminary work at Point Mugu, California on dolphins’ ability to detect human divers. This work transitioned to Hawaii for development by Navy trainers and engineers of animal/human underwater intruder defense teams, first used in Viet Nam in 1970. These teams have continued to be used in Navy service today.