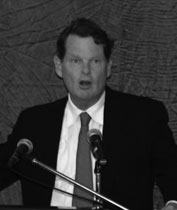 William S. Andereck, MD is an internist and the Medical Director of California Pacific Medical Center’s Program in Medicine and Human Values. He has also chaired the hospital’s ethics committee since its inception in 1985.

Dr. Andereck received his undergraduate degree at Vanderbilt University and his medical degree from the University of Tennessee in 1974. He served his internship and residency at San Francisco’s California Pacific Medical Center. He returned to Vanderbilt in 1978 for an NEH fellowship in Medical Ethics. Since 1979, Dr. William S. Andereck has combined the private practice of internal medicine in San Francisco with his ethics work and a busy clinical practice.

For years, Dr. Andereck has been conducting research in moral development during residency training, and currently he is co-investigator, with Dr. Lawrence Schneiderman, of a study looking at the effect of proactive ethics consultation in the intensive care unit.

Since 1979, Dr. Andereck has served the medical community through a variety of avenues. At present he is a trustee of the California Medical Association. In the past, he has served its Council on Ethical Affairs as member, chair and consultant.

Dr. Andereck lectures widely on ethical and economic issues. He has published in both medical literature and the lay press, and is frequently called on as an expert by the media. Since 1985, Dr. Andereck has published and edited Hotline, a newsletter for physicians dealing with managed care contracting. He also edits Ethical Times, the quarterly journal of the Program in Medicine and Human Values with his co-director, Albert Jonsen, PhD, and is a member of the editorial board of the Cambridge Quarterly of Healthcare Ethics. He was honored by the Board of Trustees of the California Pacific Medical Center Foundation for his outstanding commitment to helping the center meet its projected goals of delivering excellent standards of patient care, research and education.

Dr. Andereck’s community interests include a long-standing affiliation with youth soccer and a ten-year term as Director of the San Francisco Zoo. He and his wife Helga are parents to three children.