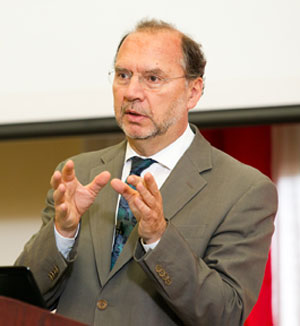 Baron Peter Piot CMG, MD, PhD, DTM, FRCP, FMedSci, delivered an insightful lecture to approximately 400 persons during the joint 4th annual Keith B. Taylor/12th Annual Windward Island Research and Education Foundation (WINDREF) Lecture on Wednesday, February 15, at the Patrick Adams Lecture Hall at St. George’s University. His presentation on the topic ‘Health Care in a Changing World’ was well received by those in attendance, which included a mixture of diplomats, members of the Board of WINDREF, medical practitioners/professionals, students, and the general public.

In his presentation, he noted, “We need to continue to advocate for global health because it is a good investment … We have made enormous progress in health over the last 50 years. Never before in history has there been such an acceleration in longevity, decline in child mortality, and increase in our quality of life; but it may be reversed now because of this epidemic of chronic diseases.” He advocates aligning three key elements – politics, science, and programs – in addressing the issues facing global health and says that once these are aligned, funding will undoubtedly be made available.

Baron Piot’s main research areas have been on clinical, microbiological, epidemiological, and public health aspects of sexually transmitted diseases, AIDS, tuberculosis, women’s health in Africa, and, more recently, on the politics of AIDS and global health, including chronic diseases. He is the Director of the London School of Hygiene and Tropical Medicine and a Professor of Global Health. From 2009 to 2010, he was the Director of the Institute for Global Health at Imperial College for Science, Technology and Medicine, London. He was the founding Executive Director of UNAIDS, Under Secretary-General of the United Nations from 1995 until 2008, and an Associate Director of the World Health Organization’s Global Programme on AIDS. Under his leadership, the Joint United Nations Programme on HIV/AIDS (UNAIDS) became the chief advocate for worldwide action against AIDS. Also, he spearheaded UN reform by bringing together ten UN system organizations.

Serendipity – A Wedding in Cambodia Leads SGUSOM Alumni To Temple For Winning...

St. George’s University Appoints Fred M. Jacobs, MD, JD, Chair of the Department...
Scroll to top
Our winter term starts this January for all students!   View FAQs      |      I do not have an MCAT score. Can I still apply?   Learn More
This website uses cookies to provide necessary site functionality and improve your online experience. By continuing to use this website, you agree to our use of cookies. View Our Privacy Policy
Accept