Chancellor Charles R. Modica, JD followed Dr. Pensick’s welcoming introductory remarks, reiterating his respect for the veterinary medical profession. He reminded them that as new graduates “you all are setting the pace and we are looking to you.” Dr. Raymond Sis, the Dean of the School of Veterinary Medicine, lead the academic oath. He advised graduates, “Success as a veterinarian depends on your knowledge and life skills, the foundation of which you received during your course of study [at St. George’s University].”

The Commencement Ceremony concluded upon the Chancellor officially conferring the Doctor of Veterinary Medicine degree and Dean Sis’ closing remarks. An hour-long reception followed where the new graduates celebrated with their families and friends as well as faculty and administration. St. George’s newest veterinarians will join the nearly 600 veterinary alumni living across the United States and other countries, including Canada, Ireland, and Australia.

The day’s events included a pre-graduation breakfast sponsored by the School of Veterinary Medicine Hill’s College Feeding Program, a program run by Hill’s Pet Nutrition, Inc. that donates pet food to veterinary medicine programs. After spending their first three years together in Grenada, the class went on to complete their fourth year at the University’s clinical affiliations at 23 of the 28 US veterinary schools, two of five Canadian schools, two of seven UK veterinary programs as well as affiliations in Ireland and Australia. The breakfast served to reconnect the students and to celebrate one of the most important occasions of their careers. They also had the opportunity to take professional photographs in their caps and gowns before the hour and half ceremony. 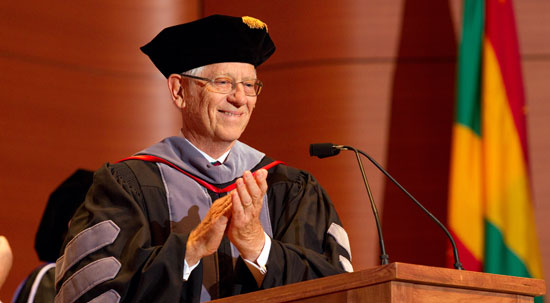 St. George’s University Raises More Than $28,000 USD for the Grenada General...
Scroll to top
Our winter term starts this January for all students!   View FAQs      |      I do not have an MCAT score. Can I still apply?   Learn More
This website uses cookies to provide necessary site functionality and improve your online experience. By continuing to use this website, you agree to our use of cookies. View Our Privacy Policy
Accept