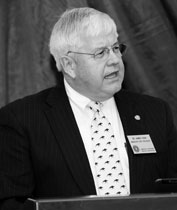 Dr. James Cook has been the owner of a mixed animal practice in his hometown of Lebanon, Kentucky, since 1977; the practice was certified by the American Animal Hospital Association (AAHA) from 1978-2008. Dr. Cook has contributed to the advancement of veterinary medicine on state and national levels.

Dr. Cook served as chair of the Kentucky Practice Act Revision Committee. This committee was instrumental in changing state laws that govern veterinary medicine. He represented Kentucky in the American Veterinary Medical Association’s (AVMA) House of Delegates from 1996 through 2001, when he was elected to represent Kentucky, Michigan, Ohio, and West Virginia in District V while he served on the AVMA Executive Board.

During Dr. Cook’s tenure on the AVMA Executive Board, he served in many capacities and accomplished many important goals. During his term as Chairman, he was given the proud task of launching the One Health Initiative Task Force. He appointed talented and outstanding visionary individuals to this task force that represented the health science profession, academia, government, and industry from both human and animal medicine.

Dr. Cook received his Bachelor of Science and Master of Science degrees from the University of Kentucky before entering his veterinary studies. Since earning his Doctor of Veterinary Medicine degree from Auburn University in 1976, Dr. Cook has maintained his membership in the AVMA, the American Association of Equine Practitioners (AAEP), the American Association of Bovine Practitioners (AABP), and the American Animal Hospital Association (AAHA). As Past President of the Kentucky Veterinary Medical Association, Dr. Cook received the Distinguished Service Award in 2002. He was named Kentucky Veterinarian of the Year in 1988.

Dr. Cook has been married to Marian Spragens since 1968. They have two children, James O. Cook, Jr. and Amanda Cook-Reed.