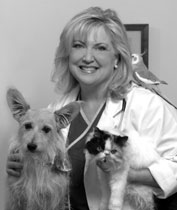 She received her Doctorate of Veterinary Medicine from the Tuskegee University College of Veterinary Medicine in 1986, and after graduation she opened the North Alabama Cat and Bird Veterinary Clinic in Hartselle, AL, in June of 1987. She opened and operated a second clinic in Huntsville, AL, from 1991-1996. In 1999, Dr. Strother had a new clinic constructed in Hartselle and moved her practice into the new facilities in 2000. She is currently the founder and hospital director for the four-doctor clinic where she cares for companion animals, birds, and a wide variety of exotic pets.

Dr. Strother is a frequent speaker on veterinary health care topics and has been a guest on Good Morning America, the Today Show, FOX Pet News, and many other radio and television shows to discuss pet health issues.

She is married, and her husband, Dr. Michael Newman, is also a veterinarian. They reside on a small farm with nine cats, two dogs, two horses, and a donkey named Milton.