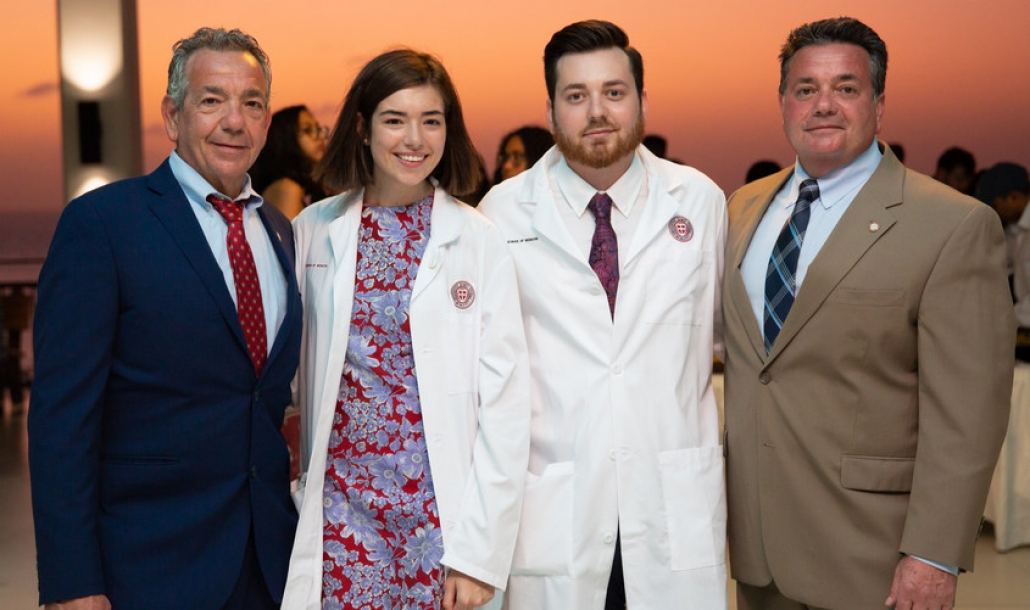 For the Rienzo family, practicing medicine seemed to run in their blood. Thus, it came as no surprise when cousins Jake and Emily Rienzo also decided to join the family business, taking their first steps into the medical profession at the Spring 2020 School of Medicine White Coat Ceremony.

Sharing the stage with them were their fathers and proud SGU graduates, Francis Rienzo, MD ’88, and his brother, Peter Rienzo, MD ’85, who had the honor of coating them. Emily, a CityDoctors Scholarship recipient, will also be the first female physician continuing the legacy in their family. Both she and Jake grew up being regaled with stories of SGU by their dads, who even carry their old SGU ID cards with them still to this day.

“I’m just so proud of my daughter; words can’t even express it,” said Dr. F. Rienzo, now an internist practicing in New Jersey. “Jake and Emily are going to be fourth-generation physicians following in both their father’s and grandfather’s footsteps, and I couldn’t be more excited to be back in Grenada for their White Coat Ceremony.”

“I’m elated that they chose to follow in our footsteps and attend SGU,” added Dr. P Rienzo, an anesthesiologist also practicing in New Jersey. “It’s great to be back and see how far the University has come and how it continues to provide opportunities for success for so many people from different countries all over the world.”

The Rienzos weren’t the only alumni coming back to SGU to coat their loved ones. Altogether, this spring’s incoming SOM and SVM class welcomed backed five SGU graduates, including members of the Class of 1983, 1985, and 1988 to join in the special privilege of coating their children.

Among them was alumnus Abayomi Odubela, MD ’83, who also shared in that honor by coating his daughter, Ibironke. Since graduating over three decades ago, Dr. Odubela has been back to Grenada three times to visit the place where he began his medical career.

“Today I am so happy to see the tremendous growth and expansion of SGU,” praised Dr. Odubela. “I am extremely proud that she has chosen to take the same path as I did. SGU’s success rate and the high caliber of its faculty makes me feel confident that she’s in good hands.”

In his keynote address, current president and CEO of The Arnold P. Gold Foundation, Dr. Richard Levin shared the reason behind the creation of the White Coat Ceremony, explaining that it was a “modern invention to correct a modern problem.” The Ceremony was devised after recognizing a shift during the late ’70s and early ’80s of students being taught to move further away from the patients, both literally and figuratively. According to Dr. Levin, rounds moved from the bedside to the hallway and now to the screen. Doctors were spending more time with data than with their patients and it had become harder to remember that illness affected a family and a community as well as the patient in the bed.

“The White Coat Ceremony is designed to remind you, your faculty, and everyone who loves you that fundamentally medicine is a human interaction,” stated Dr. Levin. “Today’s ceremony is intended to emphasize the importance of that connection right from the beginning of your training.”

A highlight of Dr. Levin’s address was his endorsement of this year’s master of ceremonies and alumnus Cholene Espinoza, MD ’15. He called on Dr. Espinoza to share the podium with him as he completed his speech.

“An extraordinary example of humanistic practice is our master of ceremonies today, Dr. Cholene Espinoza,” extoled Dr. Levin.  “She has led a life that has put her in harm’s way: as a pilot in the US Air Force she has been shot at, she was an embedded radio journalist in the Iraq war, and she is now an OB/GYN who believes that humanistic practice is as important as scientific excellence. If any of us are an example for you as you start out on this pathway, I think it is Cholene Espinoza.”

After a resounding round of applause, Dr. Espinoza shared a few words of wisdom of her own with the Class of 2024.

“I want you to really focus today on what it means to be here—to enter this profession which I call a tribe, to wear this white coat, and the immense privilege it is to be able to be a part of this institution and enter into your patients’ lives,” she said. “It is also very important to acknowledge what you have achieved to this point. I know you’re probably nervous about whether or not you’ll make it to the end, but this is an enormous achievement and you need to do a victory lap with your family, who got you here.”

Additionally, the School of Medicine White Coat Ceremonies kicked off the first full day of activities of the University’s Beyond Spice Family Weekend. A customary element to each term in Grenada, students and family members soaked up nature and culture prior to attending the special ceremony that serves as a rite of passage for aspiring physicians.